For the first time in America, televisions were a standard piece of equipment in each home. In the fifties, only 9% of Americans had televisions, but by 1960 87% of households had at least one. This new technology revolutionized the way Americans viewed themselves and the world. Famous news anchor, David Brinkley, once claimed, “television showed the American people to the American people.” TV news broadcasting in particular allowed every American greater access to distant parts of the country and the world. The average citizen was for the first time able to see their politicians, soldiers, and activists in a more authentic light than what would not have been possible through the radio. This authenticity allowed citizens greater power in the political sphere by becoming more informed. The power wielded by television was much needed during 1960/70s America, a time of great turbulence and confusion for many.

One of the greatest sources of turbulence was the Cold War and the proxy wars resulting. The Cold War was a 45 year long battle for political and economic supremacy between the United States and the Soviet Union starting around 1945. The tension between the worlds two superpowers escalated immensely in 1960 when the focus began to shift towards stockpiling nuclear weapons. A scholar at the Eleanor Roosevelt Papers Projects claims the nuclear weapons were “an attempt to maintain parity with each other’s stockpiles, but also because the idea of deterring conflict through ‘mutually assured destruction’ had come to be regarded as vital to the national interest of both.” This situation led to an immense amount of fear in the American public, but news broadcasting proved to be an effective way to keep the public up to date. Before 1960, it took international news up to two days to be relayed on news programs (New American Nation). The television revolution proved to be extremely useful in the 60s and 70s during the Cold War 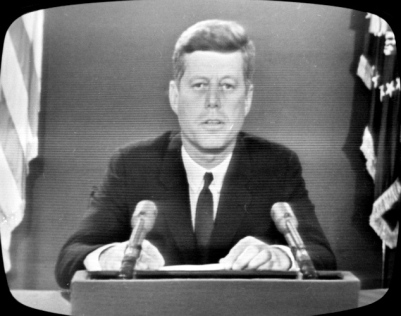 The newer, satellite televisions that rose to popularity in the 1960s allowed Americans to view President Kennedy as he informed the American people about the Cuban Missile Crisis and watch the situation unfold for the days following. This coverage of the Cuban Missile Crisis greatly affected American attitudes toward Kennedy, his policies, and the Cold War in general.

The American public was also greatly affected by the broadcasting of the most notorious proxy war of the Cold War, Vietnam War. This war was already extremely controversial due to the draft system in place to select military personnel to participate; however, the war got even closer to home when it was streamed into the living room of citizens. The streaming of the war “inspired revulsion and exhaustion”  from the American public (Hallin). This revulsion translated into protests of many kinds and eventually the change of policy towards the war.

Not only did television affect Americans’ view on war, it also affected their view on

which politicians to elect as president. This was directly reflected in the Nixon-Kennedy debates that took place in 1960. Kennedy, much younger and better looking than Nixon, was believed to have won the presidential election because of his performance on T.V., rather than his policies or political views. One way this theory can be seen as true is by examining the information collected during the debates: “informal surveys taken after the debate indicated that audiences who listened on the radio tended to think Nixon had won, while those who watched on TV claimed victory for Kennedy” (Allen). Although it cannot be for certain that Kennedy won for his good looks, or if Nixon lost because voters could see the sweat dripping down his face; it is clear that television played a role in how Americans perceived each of the two candidates.

Television news broadcasts also aided in Americans’ understanding of the civil rights movements. Whereas in newspaper many of the peaceful protests held by African Americans could be ignored or misrepresented on text, the television broadcasts showed these protests for what they were. It also showed how white Americans reacted to the peaceful protests with violence and hate. The raw footage of the Little Rock Nine being attacked by grown men evoked a reaction from fellow citizens including President Eisenhower. Eisenhower described the actions of segregationists as “mob rule” and  “sent 1,200 soldiers from the U.S. Army’s 101st Airborne Division to protect the teenagers”(Mai). Had news stations not captured direct footage of the situation, the actions of the president may have been different or less drastic.

It is clear how TV held and still holds such an immense amount power. Although to an extent this power is wielded by the stations who choose what to broadcast, it ultimately shifts to the hands of the consumers. From the 1960s onward, television became an integral aspect of American culture and allowed the average citizen to be a part of crucial moments in politics. This power allowed people to choose whose side they are on, what they believe to be true, and how America should be changed.

Photo Sources in order of appearance:

View all posts by aubriananiven